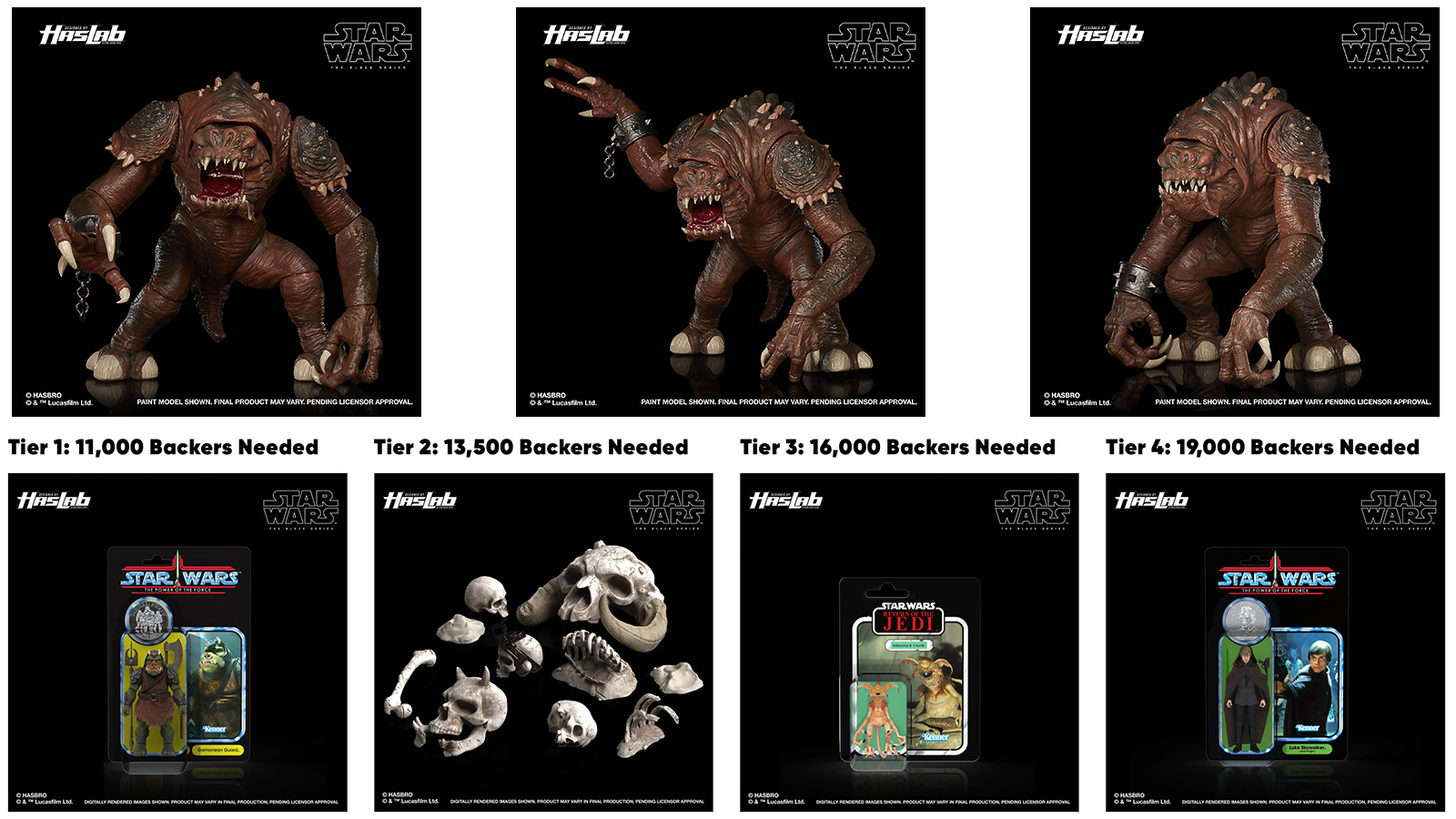 As many of you know Hasbro Pulse had a Star Wars Fan First Friday Livestream on 11/19 showing off a painted prototype of the HasLab The Black Series 6-Inch Rancor and revealed what the Tier 3 and 4 unlocks would be.

I am assuming Hasbro had this Livestream to boost preorders towards the 9000 Backers goal, which has still not been achieved as of the post.

Since the Livestream it actually had an opposite effect, in which some backers have actually cancelled their preorders and the numbers have decline from 5142 to 4866 (currently).

So what went wrong? Why did preorders not skyrocket and actually decline? Per our readers, friends, and fellow collectors it was mainly due to the bonus Tiers.

Sure The Black Series 6-Inch figure Luke Skywalker (Jedi Knight) will be all new, but this figure will end up in the main line at some point.

HasLab is described as a  crowdfunding platform that offers “Dream Products”.  The Rancor is a great “Dream Product”, but why stop the dream there and offer us repacked figures and a World-Building Backdrop as bonus Tiers in this set?

Fans were a bit disappointed not to see a Black Series 6-Inch Oola, Malakili (Rancor Keeper), or even Princess Leia (Hutt Slayer) as bonus Tiers to complement the Rancor. It seems like it was a missed opportunity not to get any of these figures out to the fans.

From the comments online, Fans were less then thrilled with the World-Building Backdrop as well, and preferred a Rancor Pit Plastic Doorway to recreate the scene of the door dropping on the Rancors Head. Fans complained the MSRP of $349.99 was not worth the price also, since the Bonus Tiers were so underwhelming and mentioned they would not back this project unless the price dropped or if Hasbro changed the items offered in the Bonus Tiers.

Anyways will the project make it to the bare minimum of 9000 Backers and go into production? There is still 16 days to go. If not, will Hasbro extend the preorder time or offer better Bonus Tier items to entice Backers? Guess we will have to wait and see.